the people of the cross: how we respond

On Sunday, a video purporting to show ISIS beheading 21 Egyptian Christian men, “people of the cross,” was released by groups claiming loyalty to the Islamic State. In it, the men are dressed in orange jumpsuits as they’re led along a beach, each with a masked militant in tow. After a message by one of the militants, the Coptic Christian men are beheaded simultaneously, face down.

Murder is heartbreaking and wrong, but there is something gut-wrenching about being a Christian and hearing of the murder of 21 fellow Christians. Fellow brothers in Christ. Because of what Jesus accomplished on the cross and in his resurrection, we who have put our faith in him are, in a very real way, part of the family of God, adopted as children of God, and co-heirs of the kingdom. We are literally family. 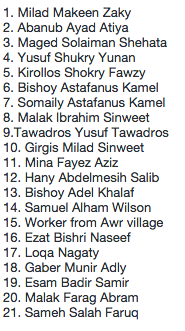 There are many emotions Christians are feeling right now: righteous anger, sadness, and confusion. These are all appropriate responses to such a heinous crime, and now is a time to mourn for our departed brothers and their families. But even more so, now is a time to pray. When we pray, we remember and acknowledge our helplessness and need for our great God to intervene.

Pray for their families, that they may experience the great grace of God.

Pray for the persecuted Church, for their safety and that they may persevere. There are many who face the threat of torture and death every day.

Pray that our faith would be emboldened to live as these men, sacrificing everything for the name of Jesus. Oh that we would see that Jesus is better!

Pray for those who murdered our brothers, that the Lord would save even among them! The apostle Paul, before he became a follower of Jesus, was one who stood by and approved the execution of Stephen, the very first Christian martyr. Saul (as he was known) went on to ravage the Church, dragging men and women into prison, intent on destroying the Christian movement. He was so feared, that even when he became a believer of Jesus, many Christians were wary and still afraid. And it was this terrorist that Jesus found and saved. It was this Saul who went on to become one of the greatest missionaries the world has ever seen. Oh that this would be a modern story! Would you pray with me that God would radically save a Saul from this evil group to radically transform the Arab world!

Our response as Christians is not violence against Muslims or mosques. Ours is not a struggle against flesh and blood and people. The members of ISIS are not our enemy. We war against cosmic powers over this present darkness and spiritual forces of evil. (Ephesians 6:12) This is spiritual warfare and the enemy is the devil.

Amid this tragedy, we have hope. The book of Revelation isn’t a sci-fi map of the future, but tells the reality of how the war is already won. This is not a cosmic tug-of-war where the victor is still unknown. The enemy is defeated. What Jesus began in his death and resurrection, he will finish when he comes back and puts the enemy under his feet and restores all things. There will judgement upon all wickedness and unrighteousness. The dragon, the serpent from the Garden of Eden, is still writhing, trying to take down people with him because he knows his time is coming up.

And they have conquered him by the blood of the Lamb and by the word of their testimony, for they loved not their lives even unto death.

Conquerors. Overcomers by the blood of the Lamb and the word of their testimony. They loved not their lives, even unto death.

Jesus puts heads back on and restores all things. We look forward to the day King Jesus returns to restore creation and make all things new. Until then, we pray and push back the powers of darkness.

One of the greatest ironies is that, historically, the killing of Christians has never slowed down the Church; it has fueled her growth. What’s meant as a deterrent and attempt to dissuade “people of the cross” has done the opposite.

We multiply whenever we are mown down by you; the blood of martyrs is the seed of the Church.

Let us mourn, brothers and sisters, and let us pray. May the Church grow and the name of Jesus be advanced! May the justice of the Lord come quickly.

Who shall separate us from the love of Christ? Shall tribulation, or distress, or persecution, or famine, or nakedness, or danger, or sword?  As it is written,

“For your sake we are being killed all the day long;
we are regarded as sheep to be slaughtered.”

No, in all these things we are more than conquerors through him who loved us. For I am sure that neither death nor life, nor angels nor rulers, nor things present nor things to come, nor powers, nor height nor depth, nor anything else in all creation, will be able to separate us from the love of God in Christ Jesus our Lord.

Then I saw thrones, and seated on them were those to whom the authority to judge was committed. Also I saw the souls of those who had been beheaded for the testimony of Jesus and for the word of God, and those who had not worshiped the beast or its image…

When he opened the fifth seal, I saw under the altar the souls of those who had been slain for the word of God and for the witness they had borne. They cried out with a loud voice, “O Sovereign Lord, holy and true, how long before you will judge and avenge our blood on those who dwell on the earth?” Then they were each given a white robe and told to rest a little longer, until the number of their fellow servants and their brothers should be complete, who were to be killed as they themselves had been.

One thought on “the people of the cross: how we respond”

What do you think? Cancel reply